GMhr - WR - SR  North Country's Tater Chip
Taters Bio:  as told by his owner,  Rick,  (Tater is owned by Rick Steenhoven of North Country Retrievers)
Tater would be best described as a lazy man's retriever, which works out very well for me.  He is as low-maintenance as they come.  We spent less than a dozen days training last year.  He got his MHR and WR one week after his second birthday, both in the same weekend. He qualified in 14 straight NAHRA Senior tests, and 4 of 7 AKC Master Events. We do not train using an e-collar, simply because we dont need to. Tater currently has over 70 known, documented field titles in 4 generations and likely many more that we are not aware of.  His grand-father is Grand Master Pointing Retriever (GMPR MHR Rik's Risky Raider MH).  He will hold a staunch point if the birds cooperate, but we have never trained for pointing or pushed that issue and have never ran him in any APLA events, but we are planning on exploring that venue in the future after his AKC MH is completed. But we dont travel far to run due to the costs involved these days, so we only run a couple local events a year. We run NAHRA (our favorite and most fun), AKC and HRC tests, and an occasional Qualifying AKC Field Trial.  He desperately wants to please and just melts when I express my dissatisfaction with him.  He was an only-puppy in his litter which makes it a surprise that he loves any and all animals regardless of their size, gender or species. He plays with the neighbors Yorkie just like a little puppy, and has never met an animal or person that he didn't like. He is a true lover-boy, enjoys cuddling, and he has an always-happy disposition. He went completely through force-fetching in less than a week in just 4 sessions.  Two sessions on the bench, one session on the lawn and one to a pile. And we were done. We went directly into handling drills from there.  He shares my passions of hunting, fishing, boating, riding the 4-wheeler, and I recently built a trailer to pull behind my bike so he can ride behind the Harley to our Retriever Events together, and in style.  He literally loves to be in the wind with me.  His passions in life are equivelent to that of a 12 year old boy.  He is completely at home curled up on the couch, on our bed, working row crops and CRP  pheasant hunting in South Dakota, where we go every November for a couple weeks, or patiently sitting in the duck blind working Mallards.  He is on open-feeding. He maintains a constant 80-85 pounds year around. He is EIC & CNM Clear with Excellent Hips, Normal Elbows, current CERF 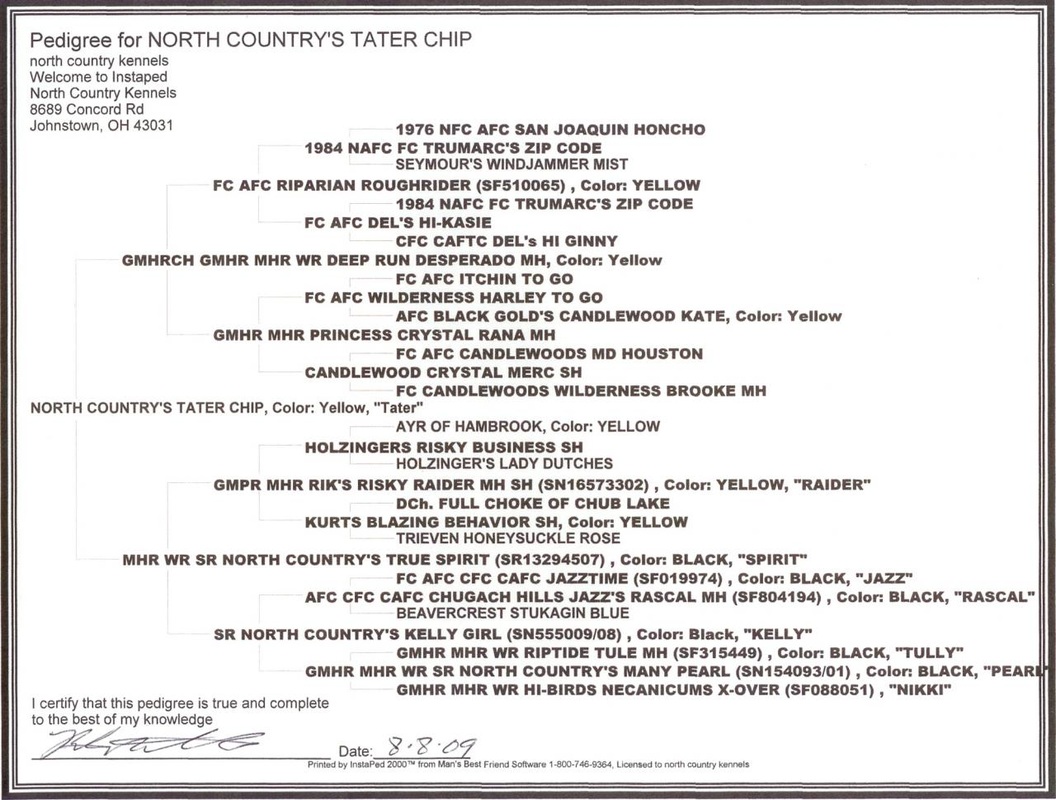